Brady Keys, Jr. was born in Austin , Texas May 19,1937 . Success did not live next door to him in his poor neighborhood. But he had the power to dream, when every­thing around him suggested that he shouldn’t. He chased the picture of success in his mind, and pursued the vision he had as an eight year old boy that led him to boldly tell his mother: “I want to be a professional football player and a businessman.”

Says Keys, “It wasn’t a dream to me, it was a commission- something I was going to commission myself to do.” Keys is one of those men who dared to dream with his eyes wide open.

“Growing up in Austin , Texas , I did not feel that my condition of extreme poverty was permanent. I was brought up on soup, bread, beans and rice. I didn’t receive my first pair of dress pants or hard shoes until I was going into high school. But, I felt that sooner or later things that I had dreamed would come true. When the soles of my shoes wore out, I learned to put cardboard in the bottoms of them. I had three pair of jeans, and we patched and patched and patched them.” Keys credits his mother, A.C. Franklin, for his determination, because she never told he couldn’t do what he wanted. He also never accepted poverty.

In spite of, and most likely, because of his environment, Brady Keys, Jr. was determined to excel. Early on, he demonstrated athletic ability. While attending Kealing Jr. High School in Austin , he attracted the attention of a varsity football coach who predicted a future for him in football. After ninth grade, Keys’ family moved to Los Angeles , California .

Impact of the Keys Group Co.

During the thirty years of The Keys Group Company’s operation, over 150,000 youth have been employed; giving many their first jobs.

“Keys’ entrepreneurial savvy is internationally recognized. When African National Congress leader, Nelson Mandela and the Bophuthatswana National Development Corporation asked an Atlanta business consultant to identify a black entrepreneur who could offer good advice to the people in South Africa as they started independent self-owned businesses, he chose Keys. Keys spent two weeks in South Africa as part of the Entrepreneur Training Convention. “I was glad that I could make a difference.”

Reflecting on the success of The Keys Group Company, there has been an undercurrent of “making a difference.” Keys has demonstrated the knack for recognizing and filling natural voids in the marketplace, all the while, lifting others as he climbed. He has been instrumental in helping other minority business owners get their start.

“Keys’ relentless drive and ambition burn as strongly today as ever. When asked what his plans are for the coming millennium, he says, “I want to get involved in more businesses. I’m heavily involved in All Pro Ostrich Ranch. I plan to do more in Orlando .”

Says Keys of his success: “When you can create and multiply yourself in the community and you can make a difference, that’s community involvement and at the same time, community power.

In 1996, The Keys Group companies contributed over $40 million to the economies of Georgia , Florida and Michigan .

The Road to College

In California , he attended Polytechnic High and was involved in football, baseball, track and field. By the time he was a senior in high school, he was recruited by several colleges and universities. He was offered the opportunity to play baseball for the Brooklyn Dodgers.

But, he was more interested in football. A scholarship offer from UCLA sparked his interest. However, he did not have the grades to attend. So he enrolled at East Los Angeles Jr. College in order to improve his grades. His stay at the junior college was brief: “I was kicked out,” Keys says.

“I was hanging around the mess hall telling jokes with a guy by the name of Richard Pryer. He didn’t get his grades and neither did I”. Expelled from junior college, Keys began working menial jobs for $1.65 an hour. The dream of playing football stayed with him, however.

From Football to Finance

At this juncture, Keys was ready to make the transition from football to finance. Though Keys was a successful athlete, he was rejected by many banks when he applied for business loans to start his All-Pro restaurants.

Keys was told by bankers, “You have an excellent franchising idea, but we’re afraid to risk the money on Negro management.” He was denied loans from greater than ten banks, all for this very reason.

Not one to give up, Keys approached Steelers’ owner, Art Rooney, Sr. who had been very supportive of his efforts both on and off the playing field. Rooney loaned Keys the seed money to start All Pro Fried Chicken on nothing but his word that he would repay the loan. Says Keys, “he (Rooney) was sent from God.” Rooney never accepted repayment of the loan.

Keys eventually left the Steelers in 1967 and went on to play for the Minnesota Vikings and later, the St. Louis Cardinals. Altogether, he spent eight seasons in the National Football League.

He opened the first All Pro Fried Chicken in San Diego , California in January 1967. Keys left his mother in law and brother in law in charge of the store and he returned to the football field. He was then able to approach the banks from a position of strength. The tenacity and doggedness Keys developed on the football field served him well in the business arena.

“I want to be a model for black people who want to go into business for themselves,” Keys said in a 1969 interview in the Christian Science Monitor. He became the role model he hoped to be, and attracted the attention of the nation. Scores of articles on the “Negro athlete turned businessman” appeared in newspapers across the country.

The All Pro Fried Chicken franchisees proved successful. They were turnkey operations buttressed by Urban Talent Development, a training center that provided continuous marketing, accounting, and food preparation advice. Keys understood the importance of training and support, as this was the first business venture for the majority of the new franchisees. The franchise deals were structured so that each of the franchise holders would eventually have equity participation in the company.

On The Football Field

He returned to football, playing for Eagle Rock Athletic Club, a semi pro unit. During a game played at the Rose Bowl, Keys captured the attention of Fido Murphy, a Pittsburgh Steelers scout. Murphy offered Keys a contract to be a member of the taxi squad. Keys, insulted by the offer, rejected it. Murphy later offered him a chance to attend Colorado State University until he could legally be drafted as a free agent.

by the Pittsburgh Steelers. Keys played six productive years for the Steelers and was chosen to start in the 1967 Pro Bowl. It was during this year, he began seriously to consider his dream of becoming a businessman.

Keys realized that he would need a career after football. He was now married and had a family to support. So, he tried his hand at business. He bought 50 percent of an existing business that a bank told him was lucrative. The business, Keys Auto Detail, cleaned car motors for automobile dealers. The venture failed miserably.

I promised myself that the next business venture I involved myself with would be one I started from scratch. I was bent on not letting that failure cause me any further problems,” he said.

“During the football off-season, Keys lived in Los Angeles , California . There, he met Bill Stennis, who was very successful in the chicken business. “I used to sit in my car in his parking lot for hours at a time, watching the number of people who went into his restaurant to buy chicken. It was then I decided, that was the business for me. I went to work at one of his restaurants for free, just so I could learn the business”

After he learned all that was involved in the purchasing, preparation, management and marketing of the restaurant, Keys began experimenting with different batters for his own fried chicken that he would later serve at his All-Pro restaurants. He went to his wife and relatives and asked them for their fried chicken recipes. He pulled the best from all of the recipes and took the resulting mixture to a chemist to have it made in restaurant quantities. The rest is history, as they say.

All Pro Fried Chicken, became the launching pad for Keys’ franchising career. He established over 50 All Pro franchises throughout the East and West coasts. In 1970, Keys made history when he entered a joint venture with Kentucky Fried Chicken.

“BLACK ENTERPRISE MUST COME TO PASS IF OUR COUNTRY IS TO CONTINUE TO PROSPER.”

Keys wrote those words in the epilogue of his book, From Football to Finance. Although there are any number of black owned enterprises in 1997, there is still much to be done. According to Keys, few African Americans are able to maximize the potential of their own businesses because they start and remain undercapitalized. “Don’t get me started on bankers,” he says.

“They deliberately keep Blacks from borrowing significant amounts of money to go into business.” However, Keys uses his success to demonstrate to bankers the need to become more receptive to loaning money to other minorities. He urges them to recognize that minority ownership of businesses is critical to the survival of urban communities.

The Keys Group Company has been ranked by Black Enterprise magazine as one of the nation’s 100 owned black businesses over several years. Even as The Keys Group Company’s sales hovered above $15.5 million, Keys insisted, “It’s not how much money I can make. It’s how much business I can do, how many young people I can hire, and how many can become successful.” 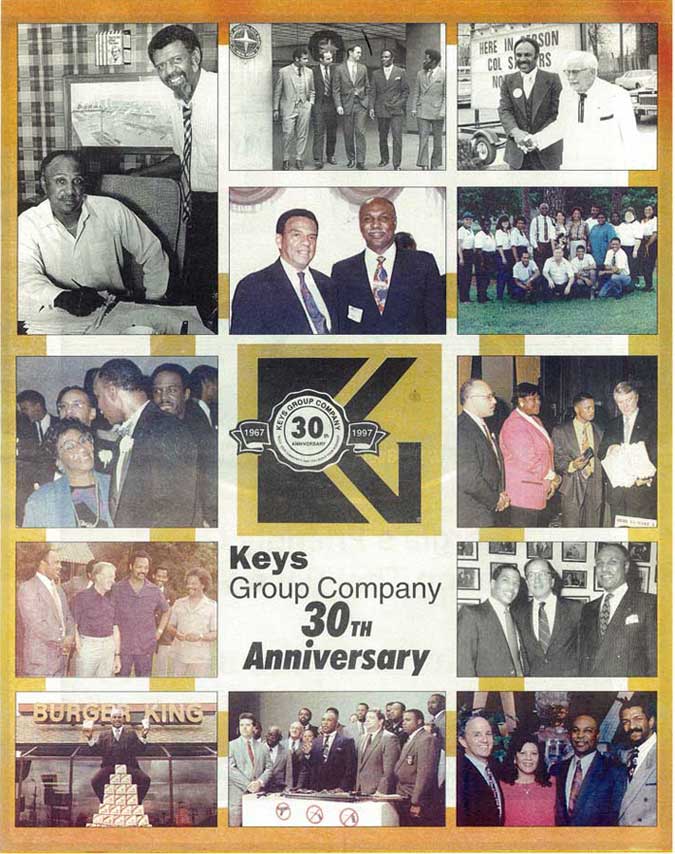 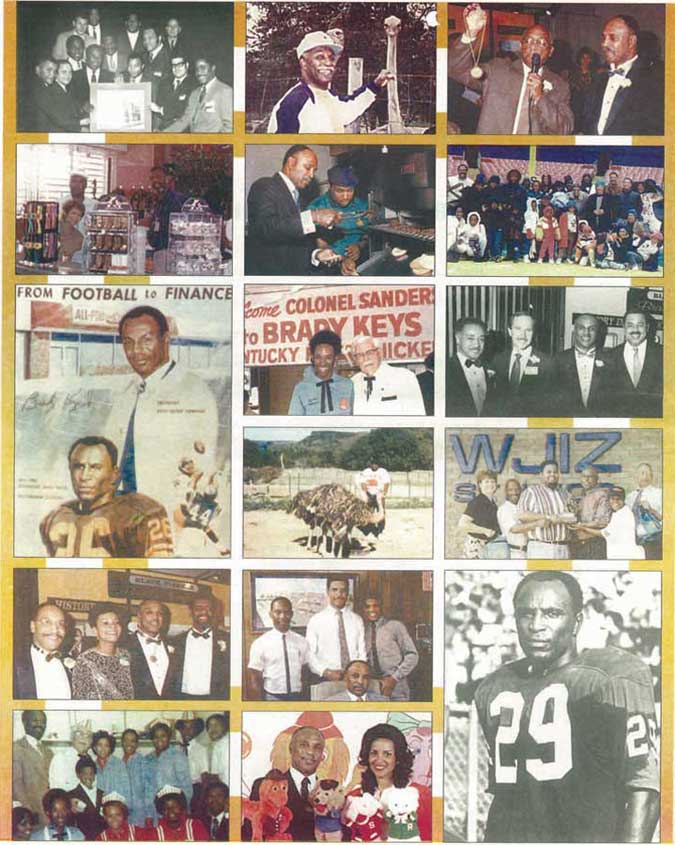 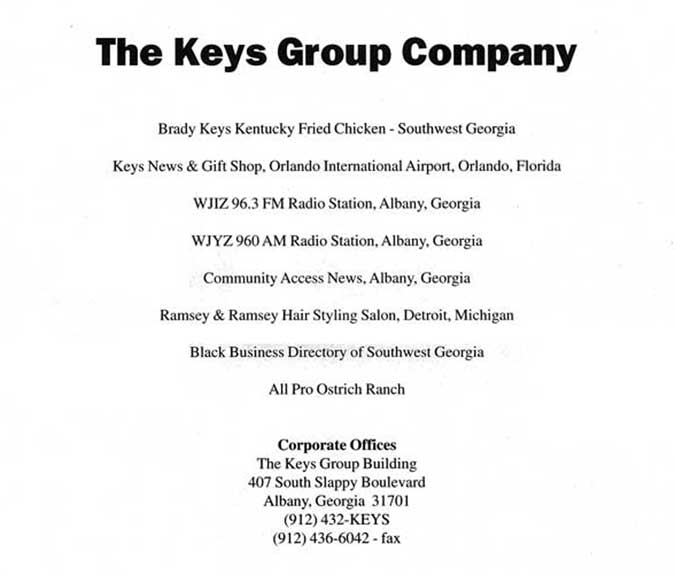 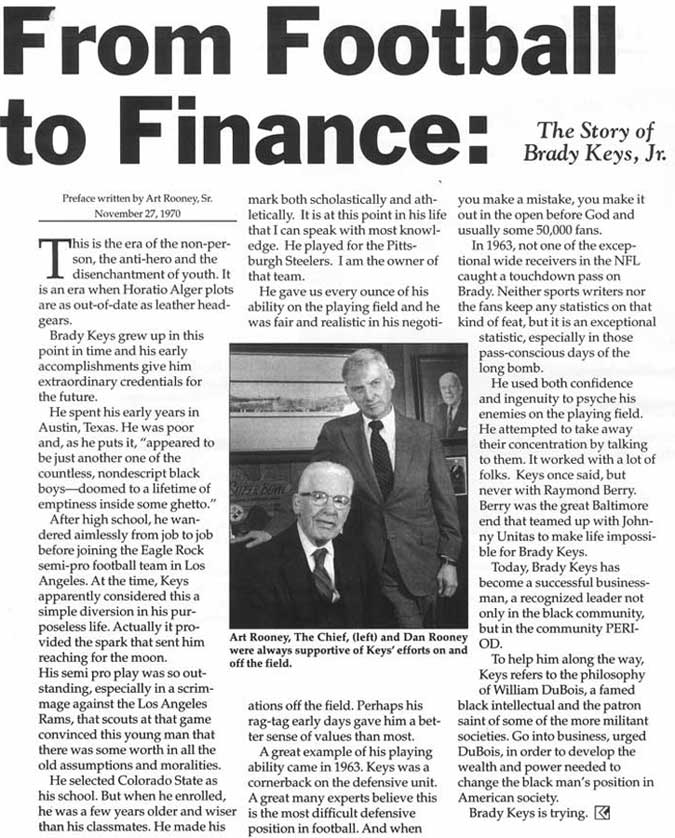 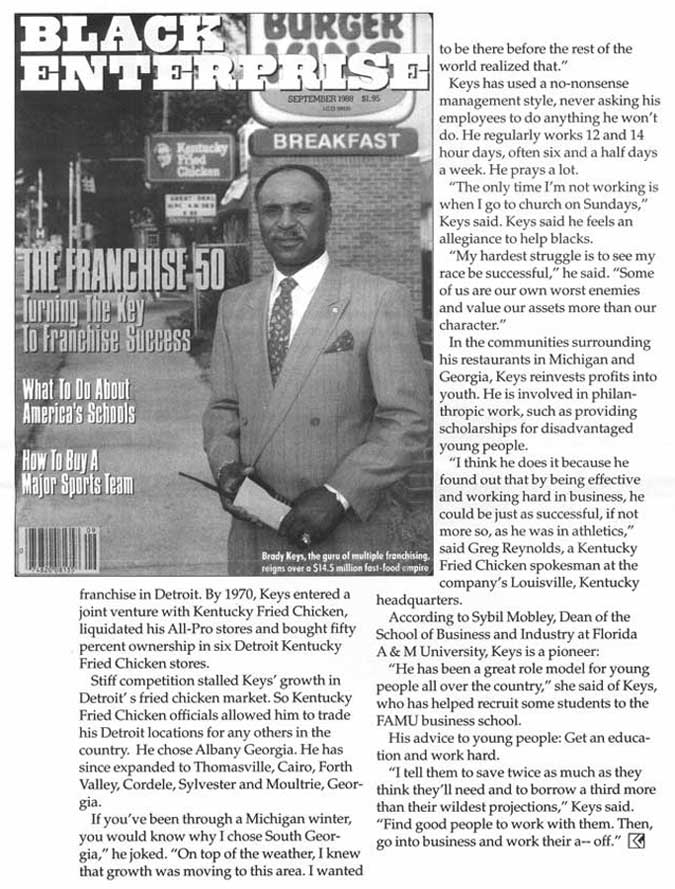 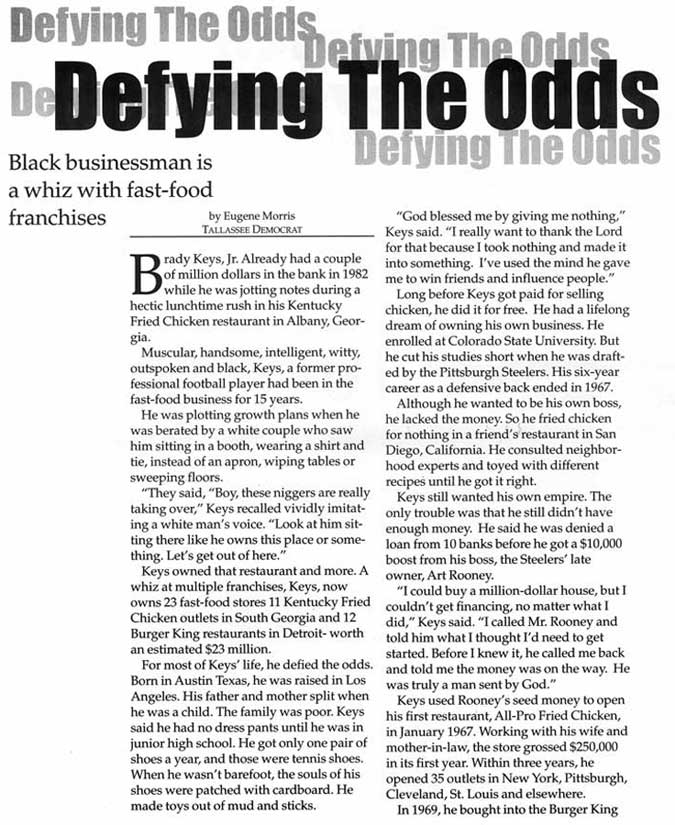 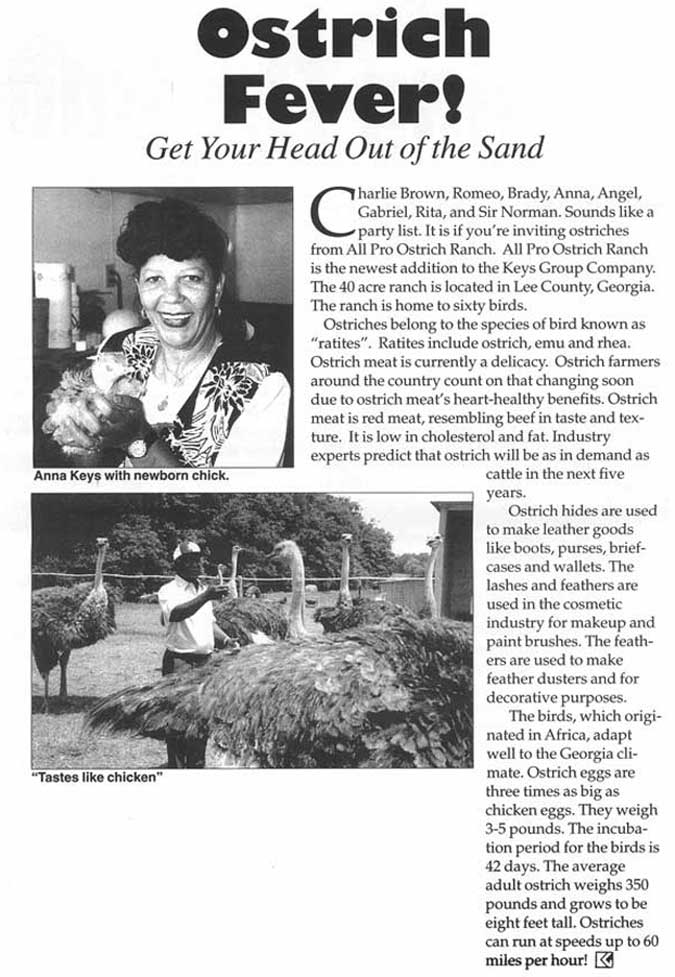 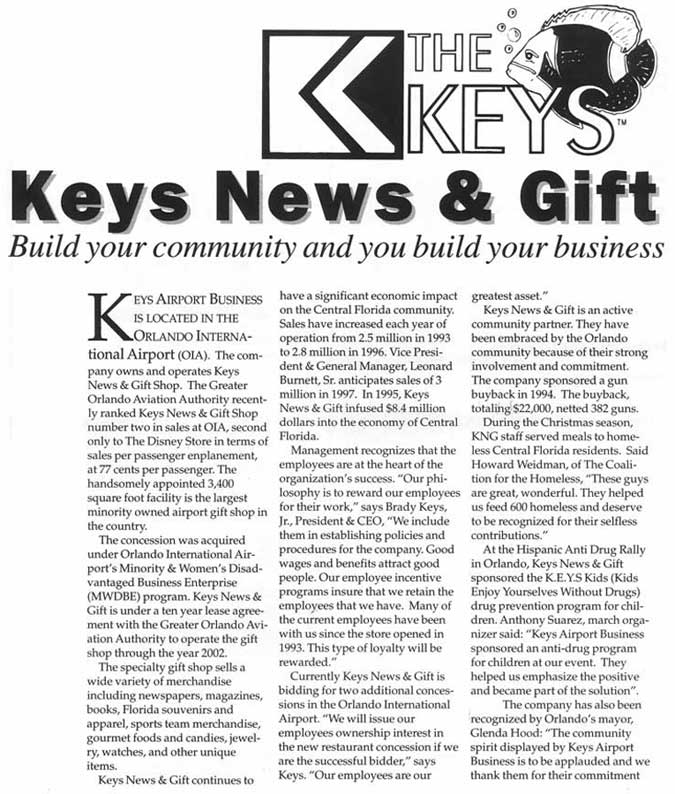 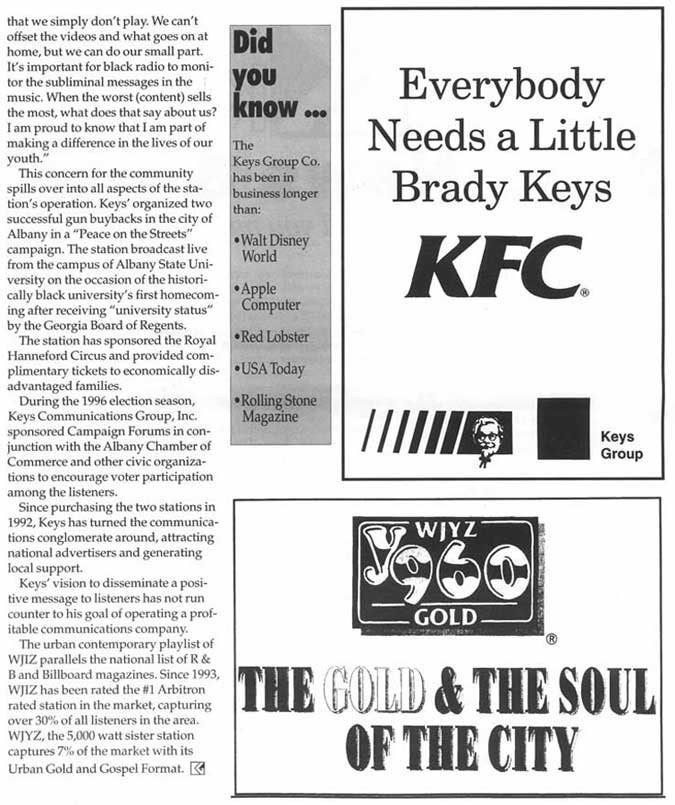 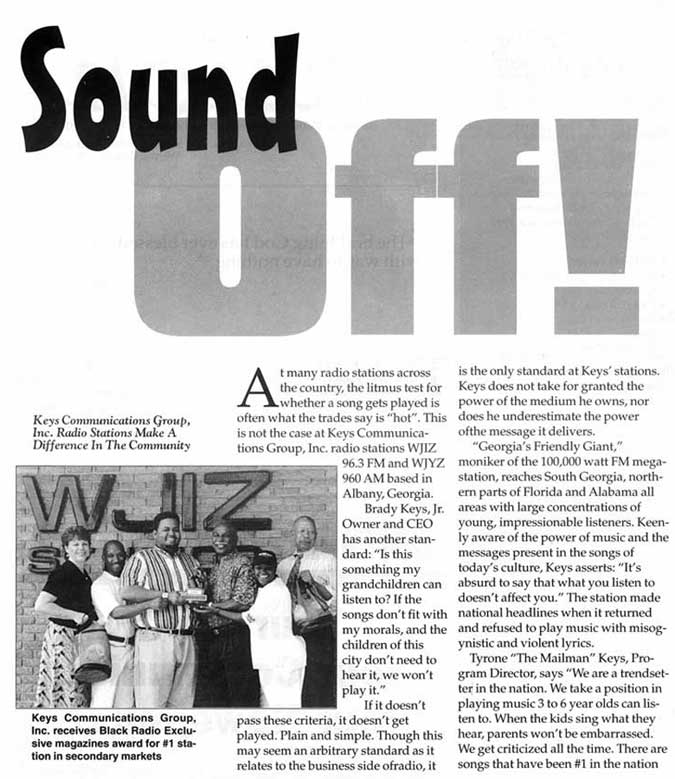 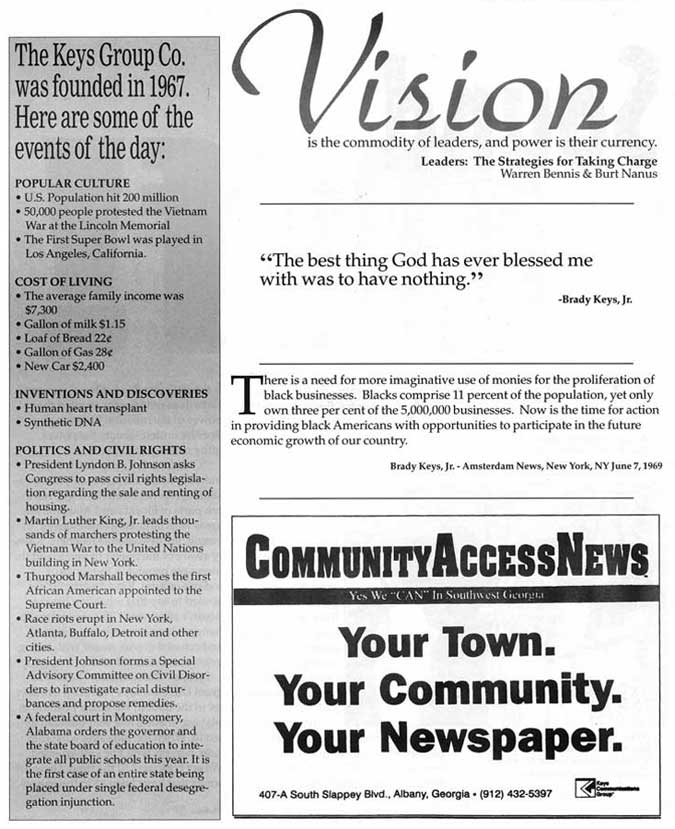 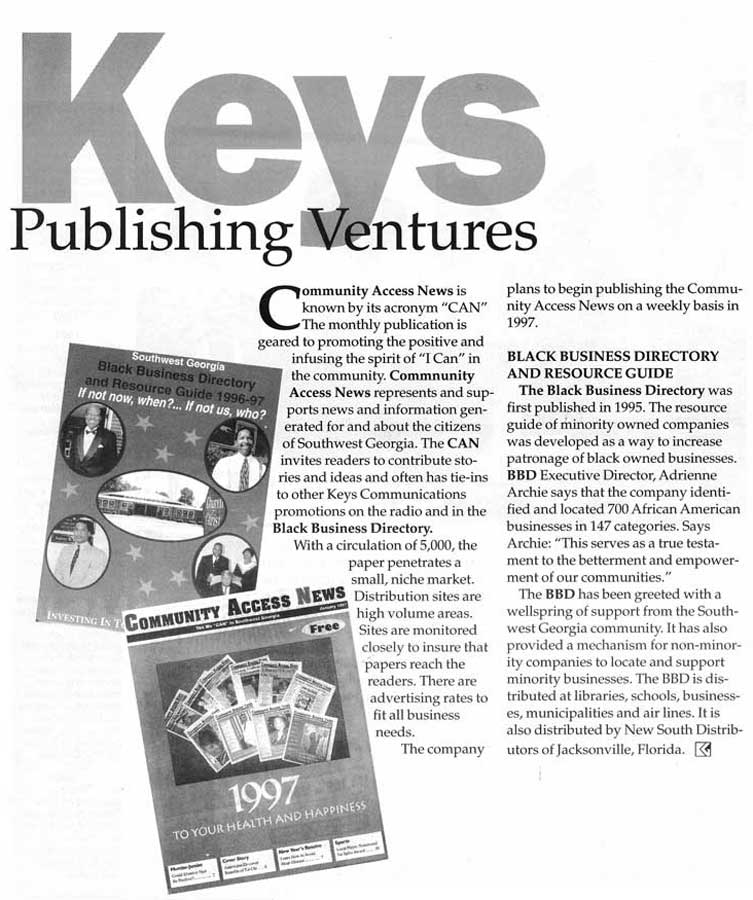 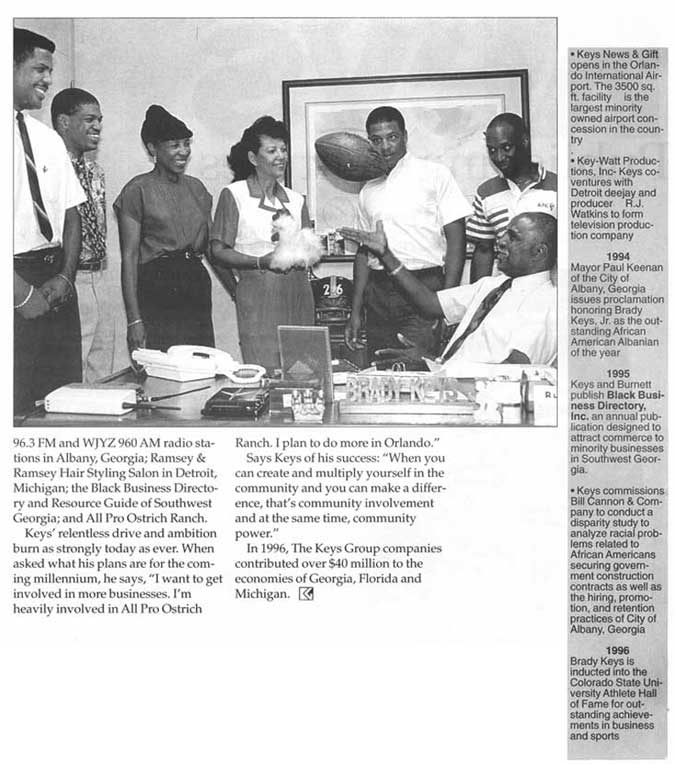 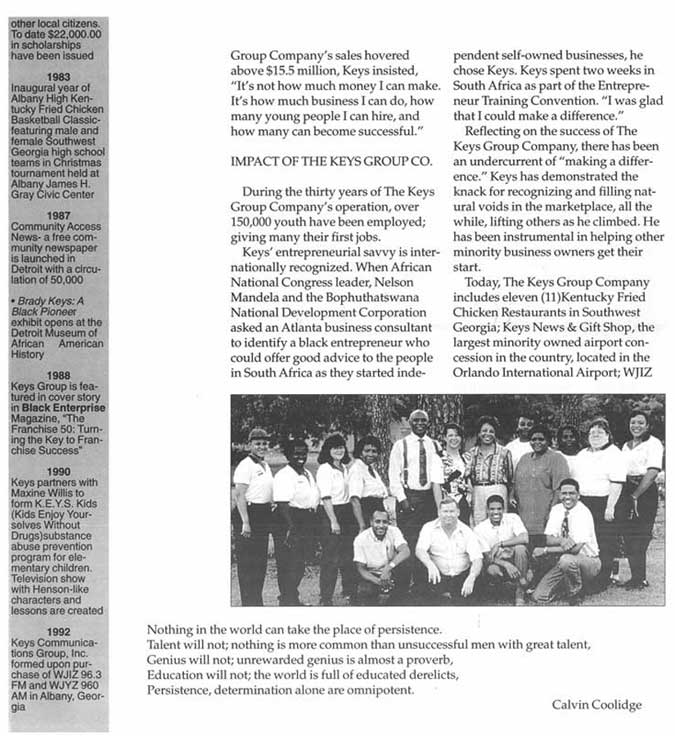 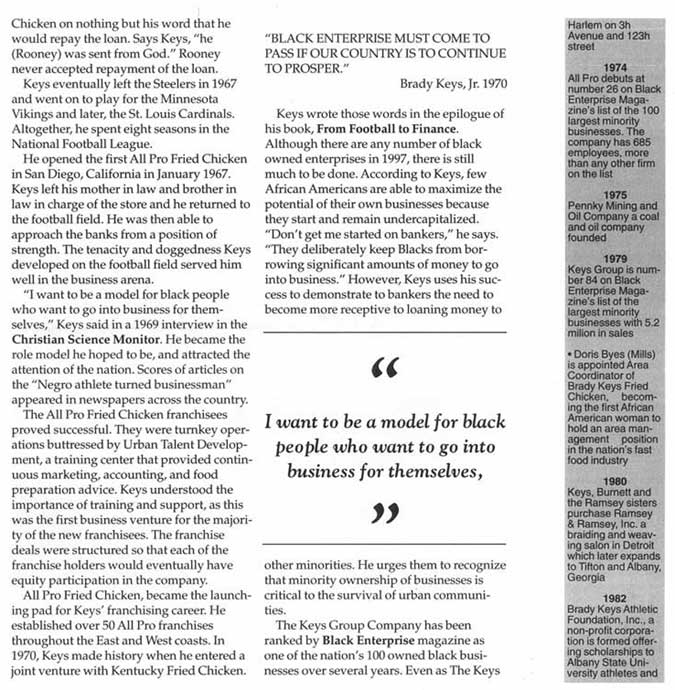 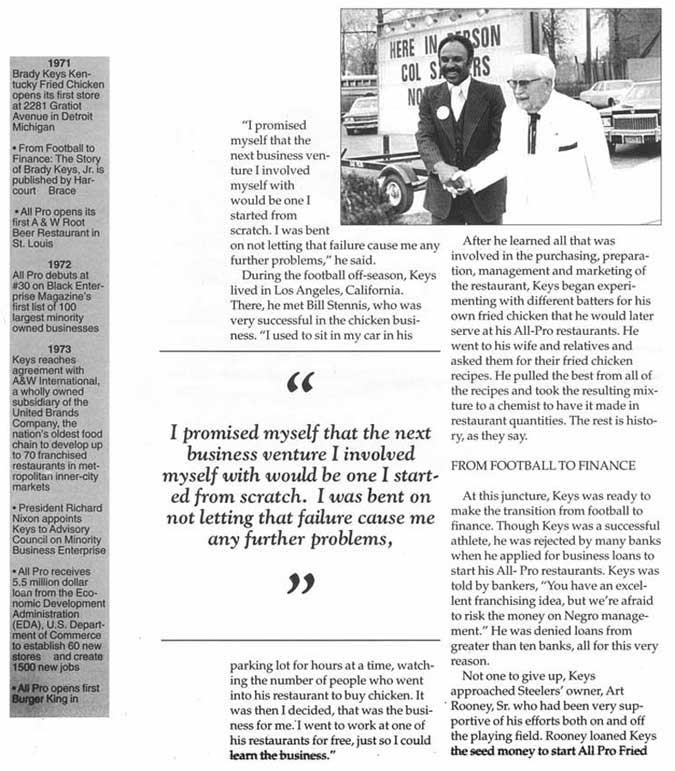 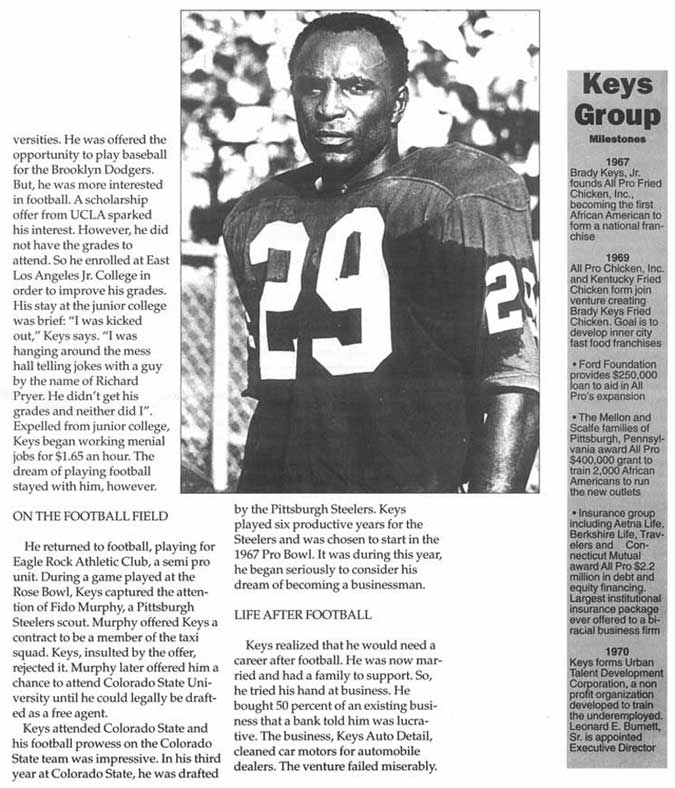 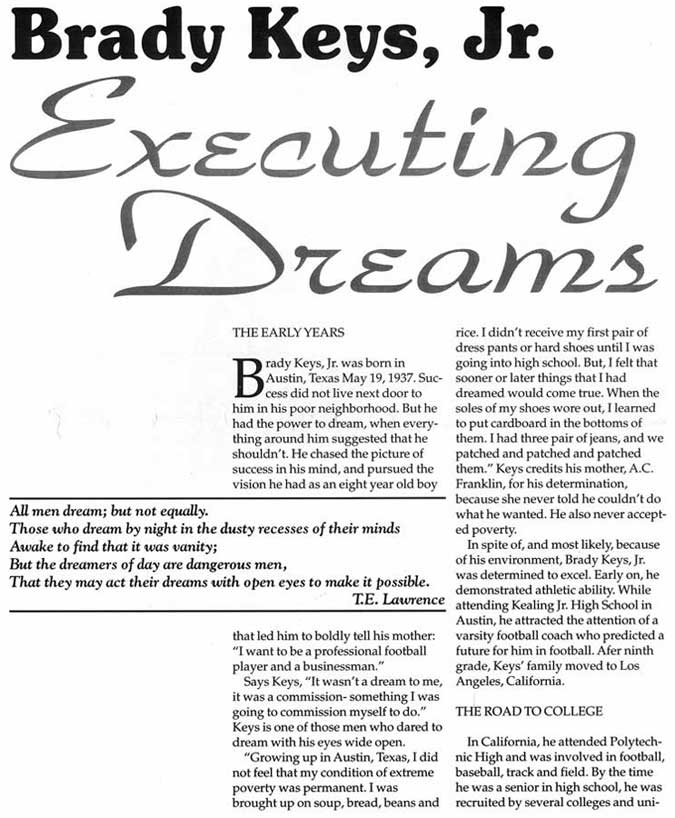 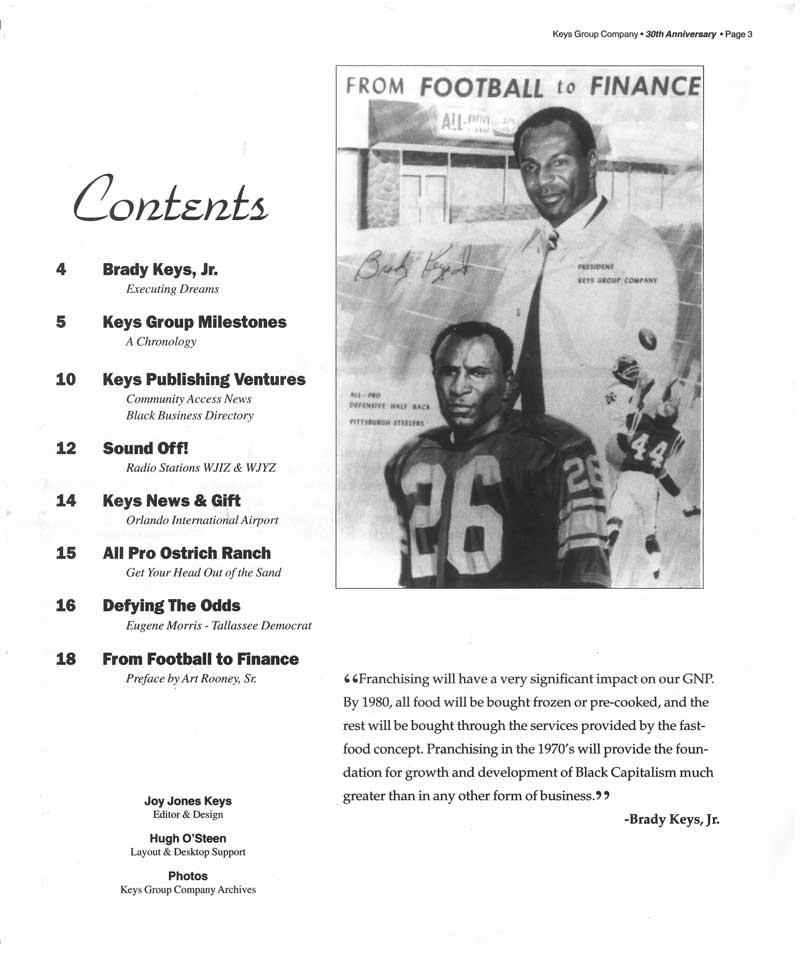 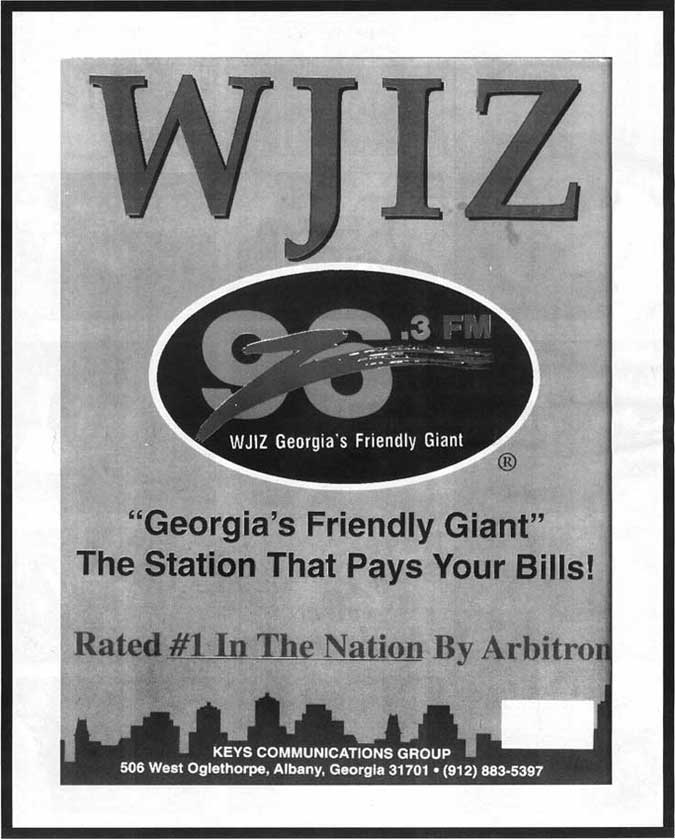